Raising the Bar: How Parents Can Fix Education 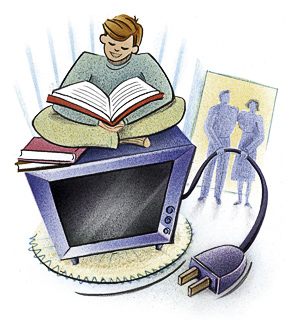 Everyone, it seems, has a complaint about the schools. Indifferent bureaucracy, change-averse unions, faddish curricula, soaring school taxes matched with mediocre student performance — the list is long and seemingly unchanging.

At the start of yet another school year, it’s time for some radical change in your local schools — a specific change that only parents can bring about. It’s a thing already being done in some far-off countries but that remains strangely rare here in America. It’s something I’ve tried — and, despite the skepticism of friends and neighbors, it seems to work.

What is this miracle that lies within the reach of nearly every family? It’s simple. All you have to do is to start insisting that your children fully apply themselves to their studies — and commit yourself to doing your part. That means making sure they do all the work expected of them as well as their abilities allow. It also means making sure everything at home stands behind these principles and supports the idea of learning.

These will sound like obvious ideas. In fact, given all the distractions of modern life, it is a radical departure from the normal order of things. Let’s face it: More than budgets or bureaucrats, more than textbooks or teachers, parents are the reason that kids perform as they do in school.

In a survey of the research, Michigan’s Department of Education summarizes the findings neatly: “The most consistent predictors of children’s academic achievement and social adjustment are parent expectations of the child’s academic attainment and satisfaction with their child’s education at school. Parents of high-achieving students set higher standards for their children’s educational activities.”

One great thing about this statement is that income should not matter, since almost any family can insist that conscientious schoolwork be Job One. The stereotype, of course, is of frantic upper-middle-class parents bombarding their precious little ones in utero with Mozart and then hectoring teachers and hiring tutors right up until the Harvard application essay.

But my impression is that many prosperous parents pay mere lip service to education. A study of elementary-school families last year in the Quarterly Journal of Economics bears this out. Researchers at Brigham Young and the University of Michigan found that parents preferred teachers who make their children happy over those who emphasize academic achievement. My experience in a nonobsessive school district is consistent with this. Our family’s intense focus on learning is regarded warily by some parents, whose dissatisfactions with school are mostly about testing and creativity but never about a lack of foreign-language instruction or overall academic rigor. Indeed, teachers have reported watering down the public middle-school curriculum in response to parental complaints that it was too difficult. The lack of demand for serious schooling is the least of it. Too many kids are growing up in homes with little emphasis on reading, learning or culture. Nielsen Media Research reports that Americans ages 2 to 17 spend an average of three hours a day watching television, which is way too much for any good student. In a study of 4,508 middle-school students published two years ago in the journal Pediatrics, researchers found that weekday TV and videogames were strongly correlated with poor school performance.

Reading among the young is also in decline. The National Endowment for the Arts, in a sobering report last year, found that a mere 30% of 13-year-olds read for fun daily (a number that has been shrinking), while 13% hardly ever read for fun (a number that has been growing). The adults weren’t much better; by their own report, Americans aged 15 and over spent less than 22 minutes a day on voluntary reading of any kind.

Is it any wonder that our children aren’t doing as well in school as we’d like? Can we really blame the educational system, with all its shortcomings, for the failure of American children to emerge from years of costly schooling with a reasonable level of knowledge about the world, or with the ability to read, write, think logically and handle math? I don’t think so.

Yet with some parental effort, children can do better. Lord knows I’m no Ozzie Nelson, and “My Three Sons” involved one more than I could ever handle. But I can convey something of my own family’s experiment in education, which so far seems to be working.

The first thing we did was to tell our kids that we had no doubt they could do well, and that in fact we expect it of them. We declared that their education is our family’s highest priority, and that during the school year everything in our home will revolve around their success in school. We reiterate these messages regularly, and we communicate them to teachers and administrators, making clear that we want to be kept well-informed.

With some effort, we resist the impulse to “help” our boys much with their homework. Would doing push-ups for them strengthen their arms? The same applies to schoolwork, whatever it is — including science projects. But we make sure homework is done early, without loud music or other distractions. We’re available for consulting, and while they’re still young we review their work nightly.

We keep a tight lid on media. Computer time is limited, there’s no gaming system, and during the school week virtually no television. Extracurricular reading is constantly encouraged, and we choose movies with care. For years now we’ve made a family project out of classic cinema, most of which is highly suitable for kids (and pleases grown-ups as well). “To Be or Not to Be” (1942), in which Carole Lombard and Jack Benny hilariously foil the Nazis, was recently a huge hit with our boys. They can have their jarring music, as long as there’s no foul language or misogyny, but during family meals — which we never miss — they can get used to Mahler or Miles Davis.

We’re also conscious that incentives matter. Like most kids, ours have spending money, cellphones and most other perks of prosperity. But none of these things are mandatory, and all parties understand that blowing off school will have a high cost. Extracurricular activities hinge on school performance too. Recently I heard from a friend that his teenage son, a superlative athlete, was getting poor grades, so I asked if they’d considered cutting back on sports. “I could never do that to him,” my friend said, and I couldn’t help thinking: “How could you not do it for him?”

We take the kids to museums and the like, but there’s always room for athletics as well as silliness. An occasional brainless blockbuster at the mall on a rainy Sunday doesn’t seem to be doing them any harm, and we spend ample time watching the Yankees and “The Simpsons.” But it turns out that acing exams is lots of fun for kids too, and once they got going, my guys wanted to keep it up. Who knew?

Kids form lots of habits over the years, some good and some bad. What a nice surprise that doing well in school can be one of them.

Mr. Akst is a writer in New York’s Hudson Valley.